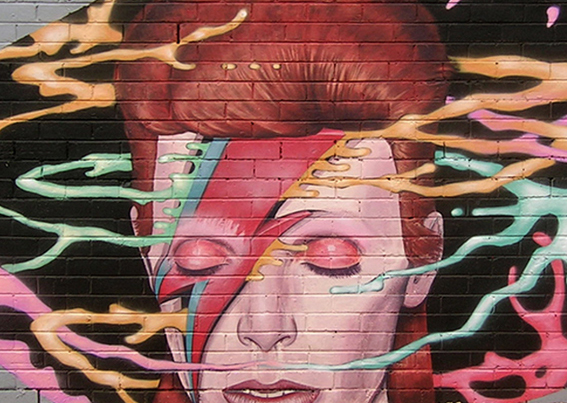 At the point when I did the design for this mural I was already scheduled to paint this wall with no prescribed brief from the client (aka total creative freedom!).

The news of Bowie’s death hit about a week before I was booked for this job, and after the initial shock and sadness at the loss of one of popular culture’s greatest creative minds I knew I wanted to paint something in his memory.

I didn’t get into Bowie until my early twenties (turned onto him by my partner and other friends), but once I was in, I was in deep and his music has been on high rotation in our household ever since. Recently my three and five year old children have even gotten the bug and sing along and dance to songs like ‘Oh you pretty things’, ‘Starman’, and ‘Space Oddity’ whenever they come on. In  particular my son thinks the lyric ‘here am I floating in a tin can’ is utterly hilarious! I think it’s Bowies ability to be so playful that makes his music appealing to people of all ages and stripes and this combined with his ability to bring together so many seemingly disparate influence to create something very unique is something I find truly inspiring.

For this portrait/mural I decided to use the iconic Aladdin Sane album cover as the reference for Bowies likeness and then add elements that evoked the way I felt about his passing.

The background for this wall was painted by another artist (Skot Edwards) and I had been allocated the black asymmetrical polygon as a space to paint in. I decided the best use of the space  was to crop the face at the lower part of the mouth, and from there I worked out what to fill the rest of the space with. What I landed on was a kind of depiction of Bowies essence or creative spirit if you like leaving his physical form to become a part of the cosmos.

His red lightning bolt has become like a panel and is separating from his face revealing cracks that his ‘essence’ escapes from, the ‘essence’ is depicted as kind of colourful swirling tendrils. I think the colourful elements reflect just how literally and metaphorically colourful Bowie was in the seventies and his head kind of floating on the black background serves as a good reference to the outer-space themes that were so often present in his work.

Below are pics of the final artwork, the design and the mural in progress.