For a brief requiring hand rendered type within an illustration,
I used this quote from the TV On the radio song ‘Province’:
“Hold your heart courageously as we walk into this dark place/
Stand steadfast, erect and see, that love is the province, of the brave/”.
And created and image that consists of two skeletons embracing within a
human heart, the hand rendered typographic elements consist of all the song
lyrics rendered faintly into the composition right to left top to bottom.
I initially thought of two figures embracing in some tragic circumstance, reminiscent of Kathe Kollwitz ‘s “Mother and dead child”. It is a moving image that conveys a similar feeling to what I wanted to evoke with my own image.
In my research I came across an image of two skeletons embracing that had been found on an archeological dig. They were dug up in Mantua, Italy and are thought to be from the neolithic period. I felt this image was a perfect fit and using the heart motif as the ‘province’ for these figures was the next logical conclusion.
They are fleshless but not without heart. Who knows the circumstance which led to them being buried together like this for 5000 years? It may well have been one that required bravery and they certainly went into a ‘dark place’.
This ‘dark place’ is reflected in the dark background and also in the brail-like type consisting of the chorus, created with dark impasto paint at the top  and bottom of the composition.  The idea being that the type is not initially seen by the veiwer but on closer inspection they see that there is something there, something they have to squint or touch/feel to make out.
I wanted to add texture to the image and play further with rustic type forms.
In between layers of marbled acrylic washes I gouged the entire song into the gessoed paper, leaving faint but angular type forms spread over the entire work. The only distinctly visible word on the piece is the last word of the chorus, ‘Brave’. It stands out boldly and imperfect in white and invites the viewer in to unearth what else is written there.
Here are some of the images that helped inspire and inform this piece 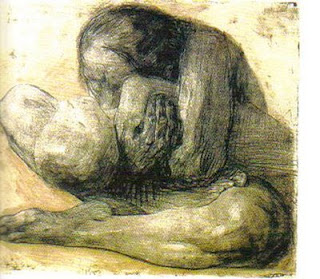 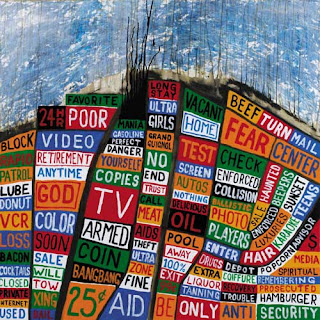 Here is my final illustration 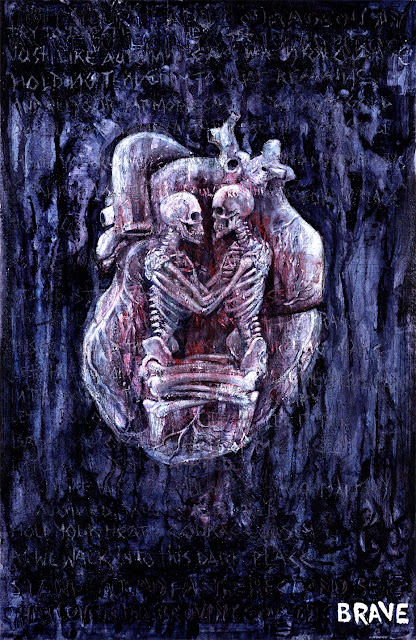