Project: create an illustration for an article from a business journal.
Not wanting to get too bogged down in financial jargon that I don’t understand too well, I have chosen an article with a string pop-culture reference. The article is basically Jay-z’s rags to riches story and all about the rise of his music empire. One quote in particular stood out to me: In the early days of his entrepreneurship, there were awkward exchanges with white-collar guys trying to relate. “In the beginning it was ‘ ‘Sup, man!’ ” he says in his soft speaking voice. “But at this point, it’s pretty much accepted that I walk both worlds naturally.”
I have basically illustrated this quote depicting Jay-z split down the middle, on the right clad in street-wear on a black background, the black world, and on the left clad in a suit on a white background, the white world. The briefcase and boom box are two similar shaped objects with polar opposite symbology associated with them, they seemed an obvious contrast to top off this dichotomy.
the illustration is still in progress, but this is it so far. 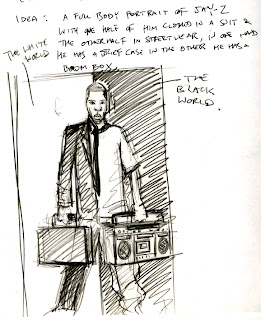 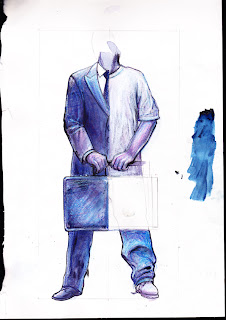 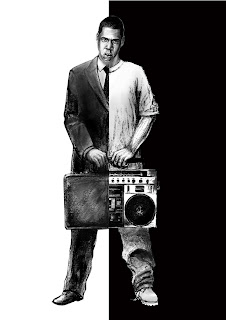